It wasn’t anticipated, it wasn’t planned but 10 days in Oman has taught me a lot about myself and my approach to this ride. We posed as archaeologists, soaked up sun on stunning beaches and met the Brazilian Ambassador, UNICEF and some giant green turtles.

Go with the flow

Two weeks before getting on the plane, I had never contemplated visiting Oman; it was a random gulf country, of which I knew virtually nothing & had no real intention to visit. Then in the course of planning our new NGO, the opportunity randomly presented to visit itself…

Tarek, who I’ve been living with in Damascus - also my capoeira teacher, new NGO colleague, and now good friend – knows people from all corners, not least the Brazilian Ambassador in Oman, and Alex, a good friend and archaeologist based there.

So with a legitimate work excuse, a great place to stay, a local guide, and the chance to get some winter sun - who was I to refuse this gulf detour? Going with flow has gone well so far.

First impressions of Oman were mixed; Alex, gave us the inside info:

The county itself seemed a strange parody; a very strict conservative Islamic state with a brand spanking new capital city, filled with big cars, highways, shopping malls and western brands: Marks & Sparks, Costa Coffee, Pizza Express, Dunkin’ Doughnuts, to name a few – it reminded me of Florida and like there you need a car to get anywhere. After two days in Muscat I was itching to go elsewhere. Luckily we headed south.

The landscape of Oman is rugged, colourful and stunning. Situated near the edge of the Arabian tectonic plate, it has just about all the natural resources Mother Earth can muster; it’s quite a show.

We spent three days visiting Alex’s archaeological site in Ras-Al-Jinz. Posing as archaeologists we made the most of the research centre’s facilities gratis, otherwise available at €150 a night; also allowing us access to the otherwise restricted turtle beach. Following Alex’s lead, we thoroughly inspected small stones, waved around our trowels and mused about the lives of the inhabitants of the site some 5000 years ago. Performance complete for the watching authorities, we were now free to make the most of the beautiful beach habitat.

The following morning we were up before light to track some Giant Green Turtles. We waited patiently in the dark for the telltale, shuffles. If the turtles see many people on the beach they turn around (hence the restricted access) but by the time hauled their 200kg+ shells, 100m up the beach, they’re not stopping for anyone. First they dig a hole, then lay their eggs, cover that hole, then dig a decoy to outfox the foxes – savvy turtle mummas. It was quite a remarkable sight but the real highlight was yet to come. 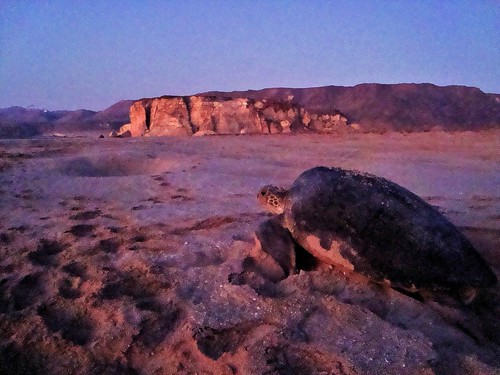 Just as the dawn broke, a little mound raised out of the sand. A tiny flipper appeared and soon after a tiny turtle, followed by a plume of tens of her little brothers & sisters. The word ‘cute’ simply doesn’t cut it. These tiny, delicate yet perfectly formed, baby turtles clambered over one another driven by instinct alone to head towards the light of the dawn and the sea. One of the most incredible natural sights I’ve seen.

However no sooner than I had marvelled at nature’s beauty than a seagull swooped down and gobbled one up for breakfast; a slight mood-kill but that’s nature’s way. Only 2 or 3 of 500 of these babies will make it back to this beach as adults, laying their next generation some 37 years later. Good luck chaps!

Our journey back to Muscat was broken by a visit to Wadi Shab. This wadi (valley/dry river bed) was impressive from the outset; it had carved an 800m sheer faced valley into the mountain. We wandered and climbed for over an hour up the twisting valley amazed by the majesty and size of it.

The jewel in the crown of this valley is a part submerged cave, you have to swim to reach. Light streams in the cracks and sounds reverberate around as you paddle around, climb the slides and dive back in. This cave is no secret but when you’re in there it feels like it. My inner five year old was in heaven.

The next few days we got into rhythm of working, eating, and playing Carrom – it’s the local alternative to Playstation. It’s a tabletop game, most easily described as finger billiards. You play on a square board with four pockets. There’s plenty of room for tactics and ‘playing nasty’ – great for a bit of banter. I normally get my ass kicked… but not for long!

Putting the work into our 'working' holiday

It’s just as well we’d relaxed because the last few days were ram packed, starting with a visit to the Brazilian Embassy. We were met by Sergio, the Brazilian Ambassador, and his charming assistant Laila. We presented our new NGO and talked at length about our plans. It went very well. 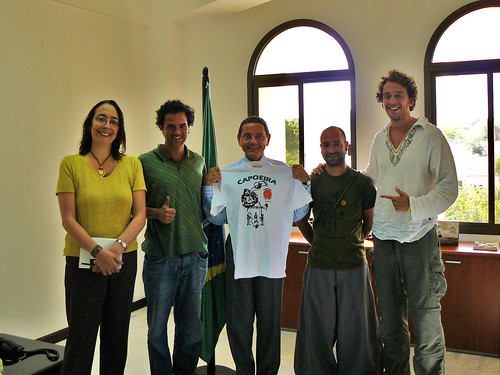 Enthused by the meeting Sergio arranged for us to meet the head of the local capoeira group and UNICEF, to explore the possibilities of kicking off one of our first projects in Oman. It seems to be one of the beauties of what we’re doing, it can work anywhere – all ages and races can gain something from putting a little more music, rhythm and play back into their lives; particularly under-privileged kids with a need to express their anger and frustrations in a safe and healthy environment.

We heard how many kids from poorer areas had stopped coming to class after the school had to start charging fees when they had to start paying for an area to practice. These are the kids who were benefitting most from the training. Abdulazziz, the group’s leader said he’d seen a massive change in their confidence and attitude that was benefitting their everyday lives, in being motivated and finding work.

With the similar experience of Tarek’s CapoeirArab group, we should be able to help the local group combine UNICEF to get some free capoeira classes going later this year, in a new ‘youth-friendly’ space in the city centre. There’s a few hoops to jump through first but we’ll get there; having the Brazilian Ambassador help things along will certainly make it easier.

This is what our NGO is trying to do – whether in a refugee camp or in Omani suburbs – getting people feel better about themselves, and having that positive attitude benefit the rest of their lives. It’s a privilege to be involved in setting this up. I’m so thankful for the freedom I had to be able to act on a whim and join in. This ride isn’t about the ride or the destination; it’s about making the most of the otherworldly opportunity on the way. Damascus has really taught me that.

An Omani feast the Ambassador had shared with us had barely settled in our bellies before we met up and trained with some of Abdulazziz’s capoeira group. It was great fun, full of the familiar smiles and energy.

No sooner had we finished our training than Alex whisked us off to the swanky Shangri-La resort for the best buffet of my life. Our stomachs had swollen somewhat after two weeks of exceptional seafood; just as well because this night my taste-buds couldn’t get enough. Just wow!

Feeling fat and full we boarded our plane home, only to be upgraded to business class (the most unlikely choice but we weren’t complaining) with yet more food… shouldn’t let it go to waste. I’ve been waiting too long to realise that actually, ‘good things come to those who ate’.

As Kenny would say: ‘if something lands on your plate, get your knife and fork out!’