During the final few kilometres en route to Fort Portal we passed through the tip of the Kibale National Park.  Right on cue on the road ahead of us was a troop of baboons.  We edged closer, gazing as they mooched around the roadside. They seemed quite tame and they wandered closer to us, seeming as wary of us as we were of them. Naturally I was snapping away; not one to miss a good a photo opportunity. 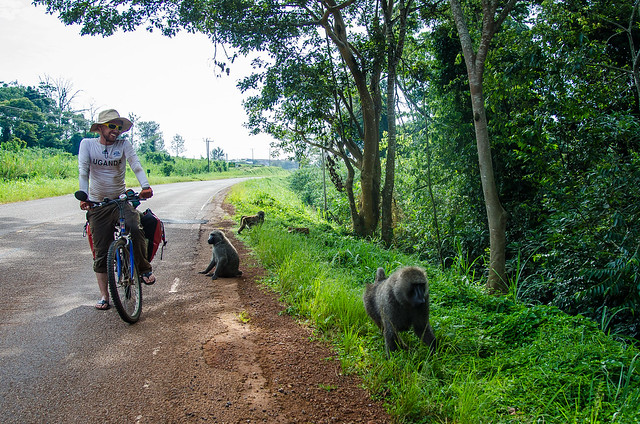 After a few minutes the stage was set to get to first base; we fed them a few bananas.  The boundaries of interspecies interaction were now down. 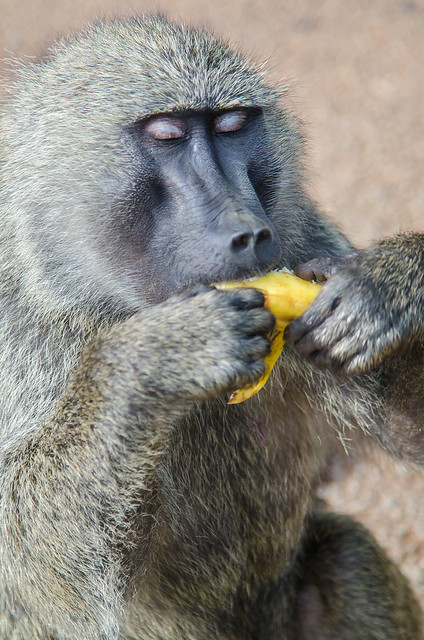 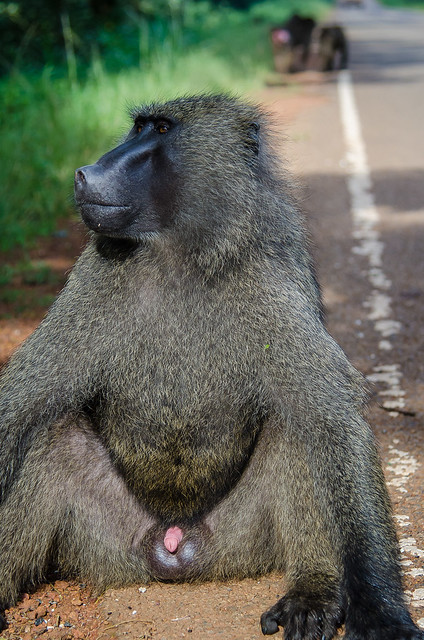 The dominant male started exploring my bike and pulled off my map pocket, deftly opened the Velcro and proceeded to examine the map closely; unfolding, sniffing, and gnawing. His tooth marks are still imprinted in Lake Victoria's bottom. 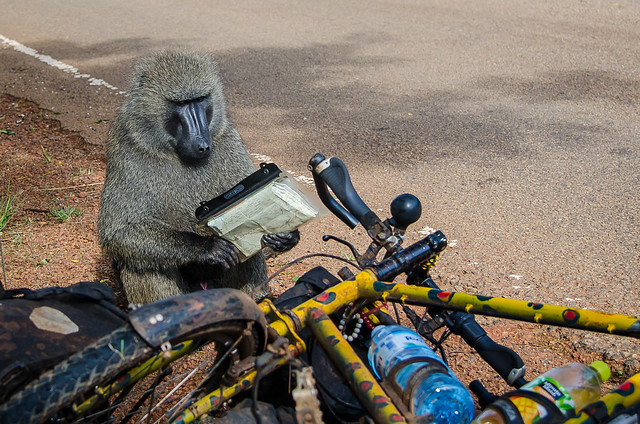 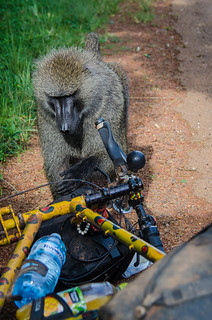 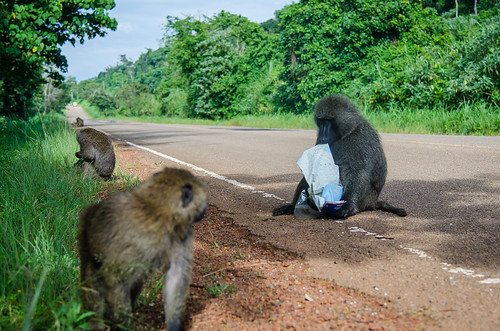 At this point – I now realise – the front of my bike became his territory.  He soon came back to start pulling off my handlebar bag, where my passport, phone and money are kept.  Needless to say I wasn’t so keen for him to disappear into the forest with this, so I tried to shoo him away.  No this belonged to him now.  So I tried again, this time more forcefully. “Woooo!”  To which he replied: “WOOOOOOO!  WOOOOOOO!”.  He bared his sizable incisors and stared at me intently; lurching forward to test my ground – my sphincter tightened with considerable force.

Having salvaged my map a few moments earlier, I was now using it as a barrier against his advances; a matador of misfortune. Trying to look macho while flapping the sheet of paper for protection is not easy - I did not pull it off! The head honco baboon I was facing does macho full-time; he knew a prentender when we saw one and wasn't about to back down.

As I dallied, three of his loyal comrades emerged from the trees and began to circle us. At this point there was a definite sense of internal panic - the kind primal survival instinct that would have surved our predessors well dodging dinosaurs. I was manoeuvring double-time to make sure we weren’t surrounded.  Luckily for Malte – my cycle buddy - they were more interested in me.

So there I stood, solo, map in hand, in the middle of the road, surrounded by menacing mandrills, a refined sense of fear running through my veins - much like a first-time tourist nervously preparing to ask some locals for directions.

Now here’s a conundrum: how do you placate a troop of baboons intent on applying the full force of their teeth to your bones armed only with a map?  I’ll allow you a moment to think about that one, while you imagine four determined looking primates circling you baring their teeth. 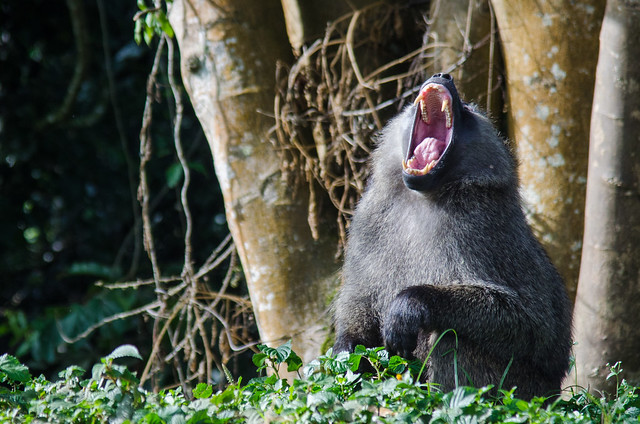 Luckily Malte’s bike held the answer.  A machete!  Malte was ‘tooled up’ for the occasion and when it dawned on me, his blade was just a triumphant unsheathing away – out it came with a pleasingly zestful ‘ziiiiiing’.  Mercifully monkey recognised said weaponry and scarpered back a few meters – enough for my sphincter to relax from a level where, for that excruciating 45 seconds, it would comfortably have been capable of crimping off a length of steel pipe.  I’ve never felt so good to have an oversized knife in my hand.

Map in one hand, panga in the other, baboons on their heels, I was a whip crack away from being Indiana.

Lord only knows what would have happened if he hadn’t recognised the machete; brawling with baboons was not a box I’d been planning to tick.

The baboons hadn’t totally feld however and I still had to free my hands to pick up my bike (now weighing close to 70kg) and cycle off... while remaining threatening enough to keep ‘Alpha 1’ at bay.  He was still looking mighty pissed off; he could have had me.  I’m inclined to agree. 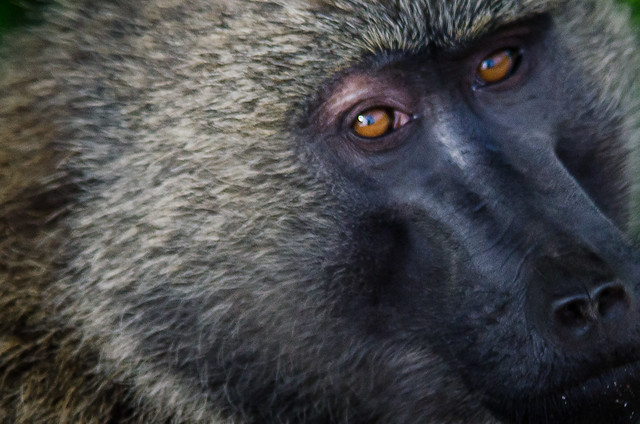 We retreated a few hundred meters down the road, arms trembling with adrenaline, fear and at this point, unbridled relief.  Nervous laughter broke out.  “S-sh-shi-shit that was close”.

Today’s lesson: unless you fancy fisticuffs with a fanged primate, don’t let a large male baboon think he owns your bike. If he thinks he does; he does.

You won’t catch me saying boo to a goose or ‘woooo’ to a baboon anytime soon. 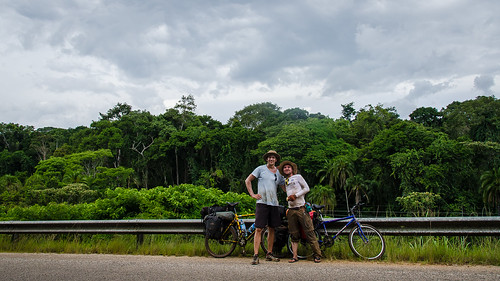